The Pueblo of Jemez (pronounced “Hay-mess” or traditionally as “He-mish”) is one of the 19 pueblos located in New Mexico. It is a federally recognized American Indian tribe with 3,400 tribal members, most of whom reside in a puebloan village that is known as “‘Walatowa” (a Towa word meaning “this is the place”). Walatowa is located in North-Central New Mexico, within the southern end of the majestic Canon de Don Diego. It is located on State Road 4 approximately one hour northwest of Albuquerque (55 miles) and approximately one hour and twenty minutes southwest of Santa Fe.

The Pueblo of Jemez is an independent sovereign nation with an independent government and tribal court system. The secular Tribal Government includes the Tribal Council, the Jemez Governor, two Lt. Governors, two fiscales, and a sheriff. The 2nd Lt. Governor is also the governor of the Pueblo of Pecos. Traditional matters are still handled through a separate governing body that is rooted in prehistory. This traditional government includes the spiritual and society leaders, a War Captain and Lt. War Captain.

The Jemez people originated from a place called “Hua-na-tota.” The ancestors of the Jemez Nation, migrated to the “Canon de San Diego Region” from the four-corners area in the late 13th century. By the time of European contact in the year 1541, the Jemez Nation was one of the largest and most powerful of the puebloan cultures, occupying numerous puebloan villages that were strategically located on the high mountain mesas and the canyons that surround the present pueblo of Walatowa. These stone-built fortresses, often located miles apart from one another, were upwards of four stories high and contained as many as 3,000 rooms. They now constitute some of the largest archaeological ruins in the United States. Situated between these “giant pueblos” were literally hundreds of smaller one and two room houses that were used by the Jemez people during spring and summer months as basecamps for hunting, gathering, and agricultural activities. 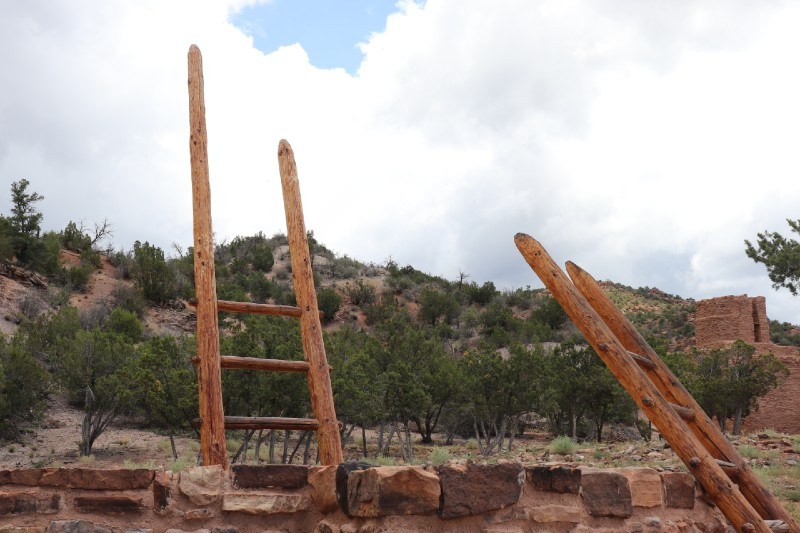 The Jemez people experienced their first contact with Europeans in the form of Spanish conquistadors during the Coronado Expedition in the year of 1541. The Rodriquez-Chamuscado Expedition entered the area in 1581, followed by the Espejo Expedition in 1583. In the year 1598, a detachment of the first colonized expedition under the direction of Don Juan de Onate visited the Jemez. A Franciscan priest by the title of Alonzo de Lugo was assigned to the Jemez People, under his direction the area’s first church was built at the Jemez Pueblo of Guisewa (now Jemez State Monument on State Highway 4 in Jemez Springs). The Jemez nation contained an estimated 30,000 tribal members around the time of the Spanish contact. During the next 80 years, numerous revolts and uprisings occurred between the Jemez people and Spanish, primarily due to Spanish attempts to Christianize by force, and congregate them into just one or two villages, where the Franciscan missions were located. As a result, numerous people were killed on both sides, including many of the Franciscan priests. By the year 1680, the hostilities resulted in the Great Pueblo Revolt, during which the Spanish were expelled from the New Mexico Province through the strategic and collaborative efforts of all the Puebloan Nations. This was the first and only successful revolt in the United States in which a suppressive nation was expelled. By 1688, the Spanish had begun their reconquest in force under General Pedro Reneros de Posada, acting Governor of New Mexico. The Pueblos of Santa Ana and Zia were conquered, and by 1692, Santa Fe was again in Spanish hands under Governor Diego de Vargas. Four more years would pass before the Jemez Nation was completely subdued and placed under clergy and military rule. Jemez ancestors were moved and concentrated into the single Village of Walatowa where they presently reside today.

In the year 1838, Jemez culture became diversified when the Towa speaking people from the Pueblo of Pecos (located east of Santa Fe) resettled at the Pueblo of Jemez in order to escape the increasing depredations of the Spanish and Comanche cultures. Readily welcomed by the Jemez people, the Pecos culture was rapidly integrated into Jemez Society, and in 1936, both cultural groups were legally merged into one by an Act of Congress. Today, the Pecos culture still survives at Jemez. Its traditions have been preserved, and as previously noted, the Pueblo of Jemez honorably recognizes a Governor of Pecos.

©  1993 William Whatley with edition from Pueblo of Jemez Administration