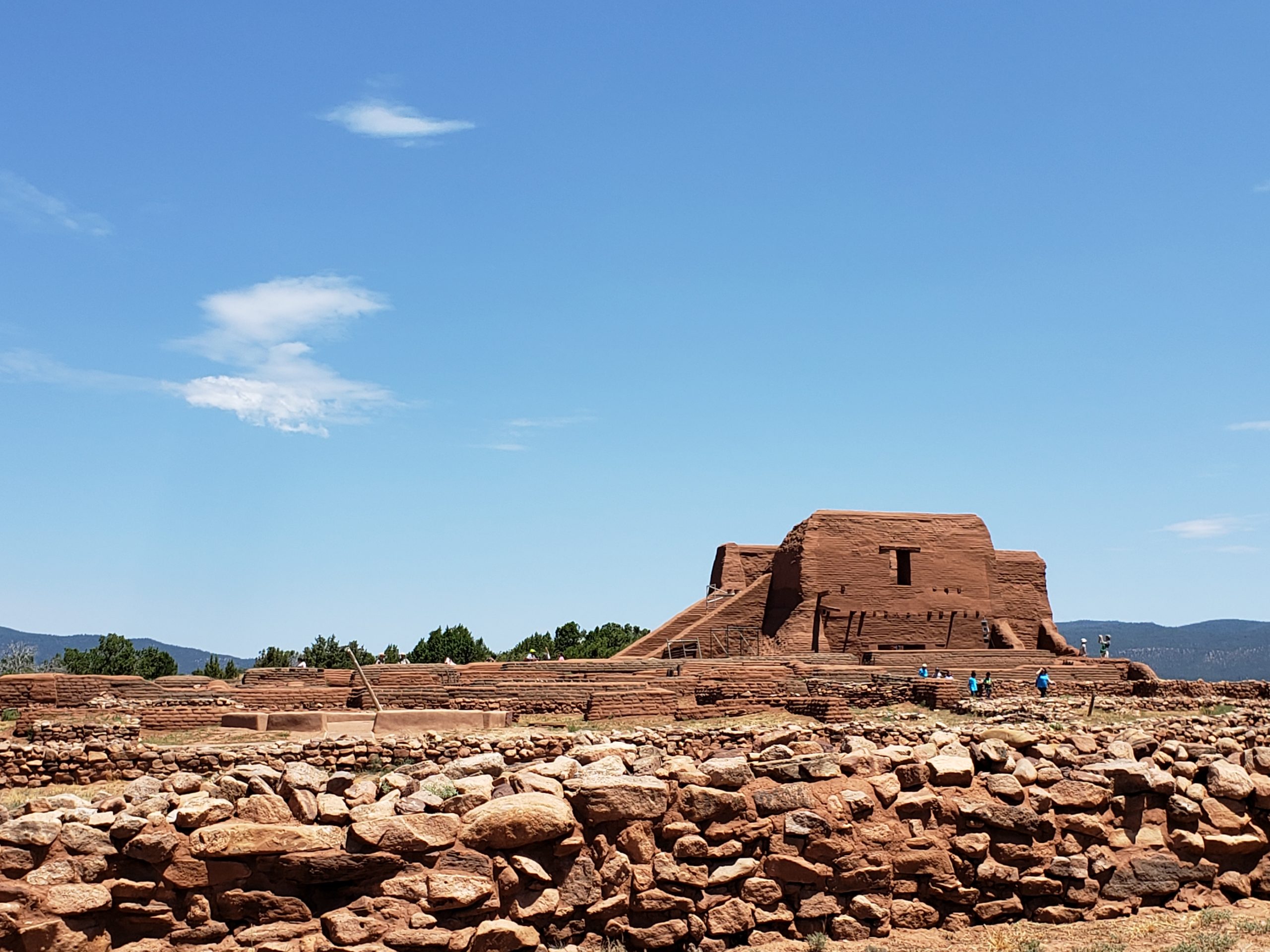 Pecos Pueblo known in the Towa language as P`ǽ kilâ which translates to “the place above the water” is a very special place for the Pecos descendants currently living at Jemez Pueblo.  During the time of the great migration by Ancestral Puebloans the P`ǽ kish were a part of the Hemish (Jemez people) and traveled the northern and northwestern mountain ranges, broad valleys and mesa country in the southwestern part of the United States. The P`ǽ kish branched away from the Jemez and took a southeastern migration route  stopping in Tǫ́ǫk’ô P’ǽ̨æ̨wâamu (Corn Cob River Valley) or the Pecos River Valley, where they built villages.  It wasn’t until the mid-15th century when all the P`ǽ kish villages consolidated into one big village on a narrow ridge above Wǽ̨hæ̨ P’ǽ̨æ̨wâamu (Squash River Valley) or Gloretta Creek.   The P`ǽ kish lived in this village on this narrow ridge as a great and powerful nation before the Spaniards came.

In the spring of 1541 the Spanish Exploration led by Francisco Vazquez de Coronado came upon the great Pueblo of P`ǽ kilâ.  Home to more than two thousand people, the Spanish described it as the largest of the Pueblos, well-fortified and having a great number of very healthy people.  It was located on the western edge of the Great Plains and on the eastern most periphery of the pueblo world.  Pecos Pueblo was a great center for trade.  Pueblo goods such as corn, beans, squash, pottery and obsidian were exchanged for buffalo meat and hides offered by the Western Apache.

The encounter with the Spanish was the beginning of the decline for Pecos Pueblo.  The once large and powerful Pueblo faced many hardships.  Over three generations, the community lost 75 percent of its population.  Pecos Pueblo suffered great losses from Spanish and Mexican encroachment, Comanche attacks, and diseases. The most devastating of all was a small pox epidemic that swept thru Pecos Pueblo.  The source of drinking water was contaminated and caused further sickness. The remaining P`ǽ kish made the hard decision to seek refuge at the Pueblo of Jemez.  On August 2nd of 1838, 21 P`ǽ kish arrived at Jemez Pueblo to humbly request for their acceptance amongst their kin.  They were greeted in the plaza by the Jemez Cacique (Chief), the War Chief, the Governor and the Jemez People.  After a long consultation with the Jemez leaders the P`ǽ kish were welcomed and accepted by their kin.  Today the descendants of the Pecos Pueblo reside with the Hemish and are one with the people, pueblo and culture.

Jemez Pueblo actively maintains the connection to Pecos Pueblo.  At the beginning of each new year, a tribal consultation meeting involving the Park Superintendent, park staff, the Pueblo of Jemez’s Leadership, Jemez Natural Resources Department, and the Pecos Eagle Society, a traditional religious society group originally from Pecos Pueblo, is held at the park. The Second Lieutenant Governor for Jemez Pueblo also serves as the Pecos Pueblo Governor, a tribal leadership role created when Pecos and Jemez merged in 1838.

The Pecos Eagle Society returns to its aboriginal homelands at Pecos to perform ceremonial rites at shrines that exits even to this day.  Also, on the first Sunday after the second day of August each year, Jemez People go back home to Pecos Pueblo to celebrate the annual feast day for “Our Lady of the Angels of Porciúncula”, the patron saint for Pecos Pueblo.  A Catholic Mass is celebrated in the morning followed by traditional dances and feasting.  It is a joyous occasion honoring our patroness and commemorating our Pecos Ancestors who reside there. When songs are sung at the Pecos Feast Day dances in Jemez Pueblo on August 2nd each year, the spirits of our Pecos Ancestors who reside at Pecos Pueblo are called upon to bring blessings to our people and all peoples who live on Mother Earth.

“I rise today to commemorate a truly historic event that took place in my state of New Mexico . . . the nation’s largest act of Native American repatriation. The Jemez-Pecos Repatriation—the reburial of nearly 2,000 human remains and artifacts unearthed from what should have been their final resting place.”

In the early twentieth century, Archeologist Alfred Vincent Kidder excavated and transferred Pecos Pueblo remains to Harvard’s Peabody Museum.  In 1999 those remains were returned back to Pecos Pueblo.

The Pecos Repatriation of 1999 is the largest repatriation by any federally recognized Native American tribe in the United States due to the passage of the Native American Graves Protection and Repatriation Act in 1990.  Jemez Pueblo repatriated more than 2,000 human remains, over 1,000 associated funerary objects, and a number of objects of cultural patrimony from Pecos Pueblo.

Beginning on May 20, 1999, more than 200 Jemez tribal members walked from the plaza of Jemez Pueblo to Pecos Pueblo, retracing the steps the P`ǽ kish had traveled 161 years earlier.  Three days and approximately 120 miles later, the people reached Pecos National Historical Park in the early afternoon of May 23, where they were greeted by more than 1,000 Jemez people and peoples of other tribal nations.  A giant semi trailer filled with thousands of cartons carrying artifacts and our P`ǽ kish ancestors had arrived from the Peabody Museum at Harvard University.

United as one, with hearts filled with peace and joy, the people escorted the ancestors into the Pueblo and unto the gravesite where they were laid to rest.  It was a joyous occasion for all present. The Pecos descendants gave honor and thanks to their Pecos Ancestors and welcomed them home. 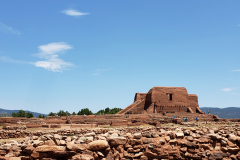 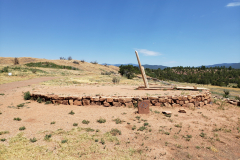 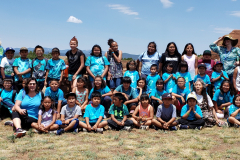 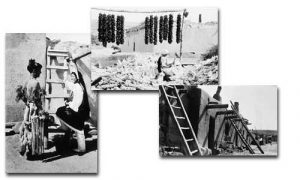 The Pueblo of Jemez is a sovereign nation with an independent government and tribal court system. 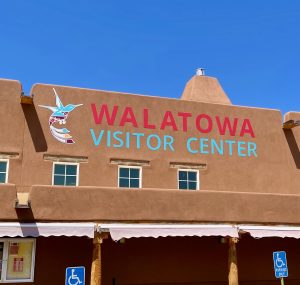